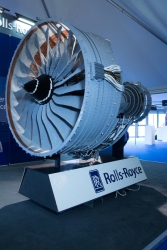 “The one of a kind Lego structure shows the complex inner workings of a jet engine and took four people eight weeks to complete. Including 152,455 Lego bricks, the engine weighs 307 kg and is over 2 m long and 1.5 m wide. Over 160 separate engine components were built and joined together in order to replicate a real jet engine. Everything from the large fan blades which suck air into the engine down to the combustion chambers where fuel is burned, had to be analyzed and replicated using the world famous building blocks.”

This story was reported in the online newsletter of ASM. Read more here.