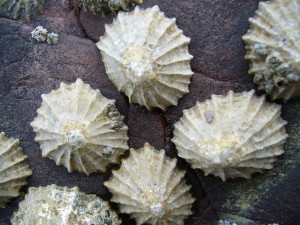 The teeth of the common limpet species (Patella vulgata) are tougher than Kevlar and stronger than spider silk, researchers report in the Feb. 18 issue of The Royal Society journal Interface. 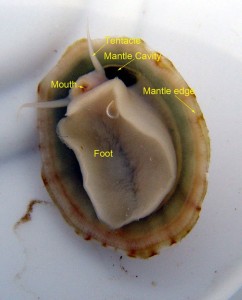 “Spider silk has been winning this competition for a long time. I was surprised and excited that limpet teeth beat the winner,” said lead study author Asa Barber, a professor of mechanical engineering at the University of Portsmouth in England.

Limpets are tough little snails that live everywhere in the ocean, from the deepest, darkest canyons to the roughest, toughest surf. Their jaunty, cone-shaped shell protects a sturdy foot that clings to rocks with a phenomenal grip. Limpets dine on algae, unrolling a long tongue studded with hundreds of sharp teeth that scrape their dinner off boulders and cliffs. 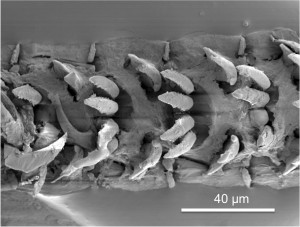 Though limpets leave behind only scratched rock, no one had ever tested the strength of their teeth, Barber said. “Nature always develops the perfect structure for a particular mechanical job, so I thought, ‘They’ve got to be really strong,'” he told Live Science.

It turns out that Southampton’s local limpets grow mineralized teeth that are 10 percent tougher than spider silk, Barber said.

The limpet uses composite fibers that are thousands of times thinner than the man-made nanofibers in airplanes, bulletproof vests or bicycle frames. The biological composites are a mix of the iron oxide mineral goethite and chitin, which acts like a natural plastic, Barber said.

Spider silk has been difficult to replicate in the laboratory, but Barber has high hopes for reproducing the strength of limpet teeth using 3-D printing.