“Popcorn behaves like a plant and an animal as it moves” – how does that work? 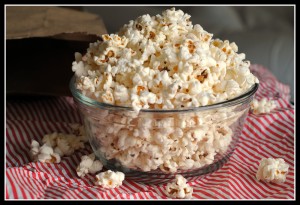 Popcorn behaves like a plant and an animal as it moves.

This story is reblogged from LiveScience

To most people, it may be just a fun food to munch while watching a movie.

But to a couple of French investigators, popcorn is a biomechanical enigma waiting to be explained.

Engineers Emmanuel Virot and Alexandre Ponomarenko carried out experiments to find out what the ideal temperature to pop corn, what happens when popcorn pops, and what makes the popping sound.

“To the best of our knowledge, little attention has been paid so far to the origin of the characteristic ‘pop’ sound,” they write.

Their findings are published in the Journal of the Royal Society Interface .

Cameras recording at 2,900 frames per second helped show what happened when a kernel of corn exploded.

When the temperature reached 100 degrees Celsius, some of the moisture inside the corn started to turn into steam, the researchers found.

As the temperature rose to around 180 degrees C, pressure built to around 10 bar, or 10 times the atmosphere at sea level.

Unable to withstand the stress, the outer shell broke open, causing a dramatic drop in pressure that forced the kernel’s starchy innards to expand and protrude.

“We found that the critical temperature is about 180 C, regardless of the size or shape of the grain,” says Virot, an aeronautical engineer at the Ecole Polytechnique.

The first thing to emerge from the fractured shell is a limb-shaped structure — a “leg” — that comes into contact with the surface of the pan and starts to compress under the heat.

Tensed and then released, the “leg” causes the corn to leap up — a height ranging from a few millimetres to centimetres — and emit a “pop” from the sudden release of water vapour.

A few milliseconds later, the granules spewing from inside expand to form a spongy flake.

Evolution from fracture to flake takes less than 90 milliseconds — 0.09 of a second.

The popcorn’s leap results from an intriguing combination of thermodynamics and fracture mechanics, rather than just the blast of pent-up gases.

“A piece of popcorn has a singular way of jumping, midway between explosive plants such as impatiens, and muscle-based animals such as human beings,” say the researchers.

To understand the origin of the ‘pop’ sound, researchers added a microphone to the video experiments.

Possible explanations for the sound could include the cracking of the fracture, the sound of the kernel as it hits the ground, or the release of water vapour.

The researchers found that the sound didn’t happen immediately after the kernel fractured. Instead it occurred about six milliseconds after the second fracture and lasted about 50 milliseconds.

After discounting the first two hypotheses they concluded that this ‘pop’ sound is triggered by vapour release in much the same way as sound is released following volcanic eruptions or the ‘pop’ of a champagne bottle cork.