Multilayer polymer films may have a number of interesting optical and electronic applications that are being investigated in this project. Some projects exploit the optical interference effects inherent in these one-dimensional photonic crystal structures. Such effects include the slowing down of light near the photonic bandgap edge which has allowed us to construct high performance surface emitting dye lasers.

Distinct images as well as bitwise patterns have been written into an all-polymer, co-extruded, multilayer medium using low power, compact lasers.  The film consists of alternating layers of two different polymers, one doped with an organic fluorescent dye.  Patterns are written by focusing a Blu-Ray, near-UV laser into one specific doped layer and exposing for a short period of time.  The information is stored by a peermanent reduction in the FL of the dye.  The images show well-defined patterns without any observable interference between them. 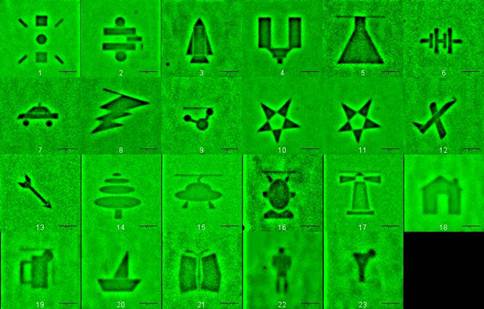 Current optical data storage technologies, such as Blu-Ray, have only a few layers capable of being written, which are space 20 microns apart.  The optics and wavelenght used limit the data capacity in each specific layer to about 25GB.  To incrase the total capacity, more layers are needed, but these commerical techniques are severely limited by scattering and reflection losses.

In order to increase the capacity, we have fabricated these flims with 23 active layers interleaved with 23 optically transparent buffer layers.  Fabricating with our simple and scalable co-extrusion technique also allows the active layers to be spaced by only 3 microns, allowing all of these layers to be located within the working distance of typical lenses.  The buffer layers reduce the background fluorescence, parasitic absorption, and cross-talk during reading.  The all-organic nature of the device also drastically decreases cost.

The large area films produced can be cut and laminated onto hard polycarbonate disc substrates for integration into similar read/write optical systems currently employed commercially.  The layer thickness can also be adjusted for the specific optics and detectors to maximize the signal and minimized the background.

Research is currently ongoing to utilize novel active and polymer materials which will lead to improved photoresponses applicable for robust optical data storage.