Activities in Platform IV are directed toward innovation with the multilayer co-extrusion process to create new polymeric structures.

Additional activities aim to identify, characterize, and utilize in novel ways the unique properties of the polymer interphase within microlayers and nanolayers. 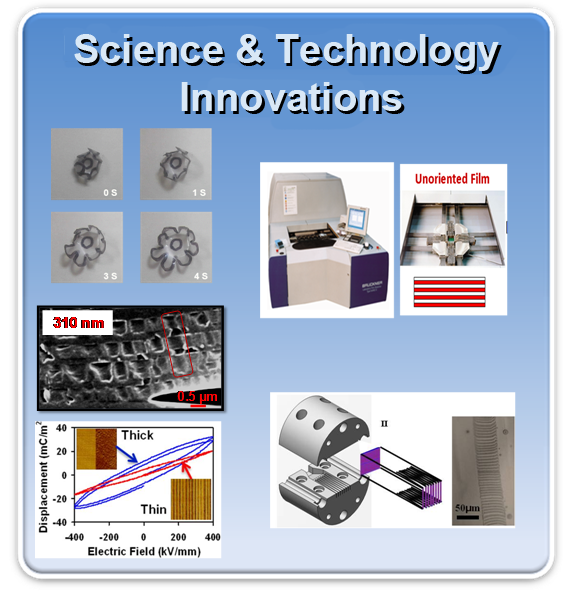 Some of the projects in Platform IV include:

Shape memory polymers are able to “memorize” a macroscopic permanent shape, fix a temporary deformed shape under specific conditions of temperature and stress, and then recover their original shape upon application of an external stimulus such as heat or light. These materials possess the advantages of high elastic deformation, low cost, low density, and potential biocompatibility and biodegradability compared with shape-memory alloys.  Currently, a vast majority of the shape memory polymers (SMPs) are produced by copolymerization which is an expensive, highly solvent dependent production process.  Multilayer co-extrusion can be used to produce SMPs in a solvent-free, continuous and large scale process.  The temporary shape can be formed or diminished at a thermal transition, such as a glass transition or melting. 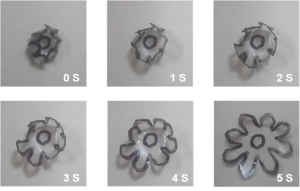 Time series of photographs showing the recovery of a shape-memory material (PU/PCL).

Polymer fibers can be used in a range of applications including membranes, filters, and tissue scaffolding.  One conventional method of producing fibers is melt spinning.  This approach is, however, limited in that proper solvents and high voltage must be used.  The development of a new fiber production technique for producing fibers is needed.  The goal of this work is to provide a new and improved process for producing polymer nanofibers at reduced cost.  The new process for producing nanofibers consists of using a vertical-layered co-extrusion and multiplication technique, followed by a delamination procedure.

Extrusion technique #1 for producing polymer nanofibers.  A polymer vertical layered structure is produced and then stacked between surface layers to multiply the number of fibers while also reducing the fiber width.

Extrusion technique #2 for producing polymer nanofibers.  A polymer horizontal layered structure is produced and then extruded through a slit exit die.

Insulating dielectric materials are important in the electronics industry for their use in capacitors and electrical insulation.  Multilayer coextrusion provides a unique opportunity to create novel structured materials with enhanced dielectric properties, particularly when the component materials have significantly different dielectric properties.  Enhancements in breakdown strength and reduction in loss properties have been observed.  The incorporation of a tie layer to form a 3-component structure as well as the additional processing step of biaxial orientation have produced enhanced properties.  High temperature use and graded structures as well as optimized material systems are also envisioned for the future.

Top: PC/PVDF-HFP, 32 layer, 12 mm multilayered film used to produce a capacitor, which can be used in electronic systems.

The main purpose of this project is to develop high energy density dielectric film capable of high temperature use.  Two high temperature materials, polysulfone (PSF) and Ethylene-chlorotrifluoroethylene copolymer) were chosen for microlayering against PVDF.  Surprisingly, these films also had the advantage of low hysteresis and high energy density.  The hysteresis loss of a 32 layer PVDF/PSF film at 125 oC and an electric field of 250 MV/m was below 20 %. Measurements also showed that breakdown strength was enhanced. This indicates that multilayered film architecture is promising for high temperature capacitor operation.

In the future, experiments will be conducted to trace the ionic migration and dipole flipping and their relation to the observed hysteresis behavior and breakdown strength.  This fundamental study is necessary for the design and construction of next generation high temperature, low loss capacitors.

Top: Dielectric hysteresis and corresponding unreleased energy as a function of electric field and temperature.

The microlayering process has been utilized to produce novel materials with enhanced mechanical properties through selective manipulation of layer thickness and understanding of confinement-induced morphology.  Forced-assembly processing provides a unique opportunity to examine the effects of confinement on block copolymers (BCPs) and semicrystalline polymers via conventional melt processing techniques.

Deformation studies of the confined BCP showed an increase in ductility as the layer thickness decreased to 190 nm due to a shift in the mode of deformation from crazing to shear yielding.

Stress-strain behavior of these films has shown that as layer thickness decreases, the modulus increases to 3x that of the PEO control, and the yield point decreases as well, approaching that of the PEO control. The in-plane PEO crystal fraction was found to decrease to ≤10% with strain in thicker (125-3600 nm) layers, while the 20 nm layers retain ~40% of the original in-plane crystals. Atomic force microscopy showed that thin layers composed of aligned PEO lamellae deform through non-uniform micro-necking, rather than typical axial alignment of the crystalline phase seen in bulk materials.